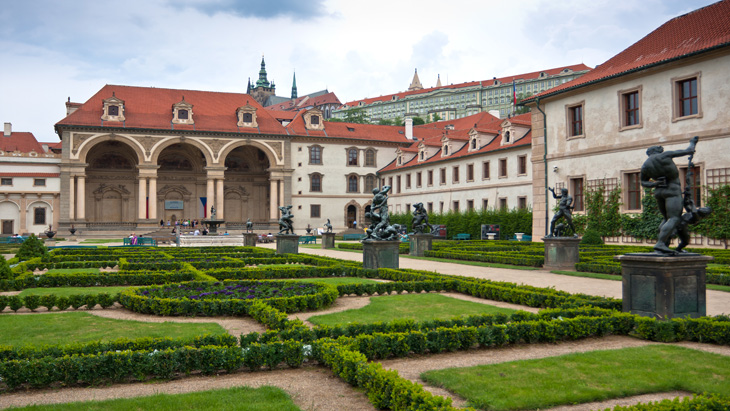 Situated in the Lesser Quarter the garden is part of the Wallenstein palace, nowadays the seat of the Senate of the Czech Republic. Built together with the palace in 1623 - 1630 the garden is one of the finest examples of the early Baroque in Prague. It is a lovely and peaceful place in the very center of Prague.

Sala Terrena immediately catches one’s eyes when entering the garden. Built in 1627 by Andrea Spezza, this monumental three-arcade building is 30 meters high and reaches the palace’s height. The walls of Sala Terrena are decorated by fresco paintings and stuccoes depicting scenes from the Trojan was by Baccio di Bianco. Sala Terrena serves as a venue for concerts and other cultural events these days. When you enter the garden from the palace, your attention will be drawn to a large wall opposite the entrance. At first, you might get the impression that you’re looking at skulls, however, it’s a wall with artificial stalactites imitating limestone cave (grotta). There is an aviary for exotic birds to the right of the cave. The sculptures representing figures from Greek mythology that you can see around the garden were made by Dutch sculptor Adrien de Vries. However, these are replicas; the originals were plundered by the Swedish army as war booty in 1648 and are now displayed in the garden of Drottningholm castle in Sweden.

The garden is 1,7 ha large and there is a pond where you can feed ducks and carps. Here, in 1816 the inventor Josef Božek showed his first model of a steamship, which was only a little boat with an engine but it was an important step before introducing a proper steamboat in Stromovka in 1817. Located on the small islet in the middle of the pond is another copy of de Vries work, a marble fountain with statues of Hercules and the Naiads. Wallenstein Garden is a perfect place to relax after a walk to the Prague Castle and if you’re lucky you might spot peacocks wandering  around the park.