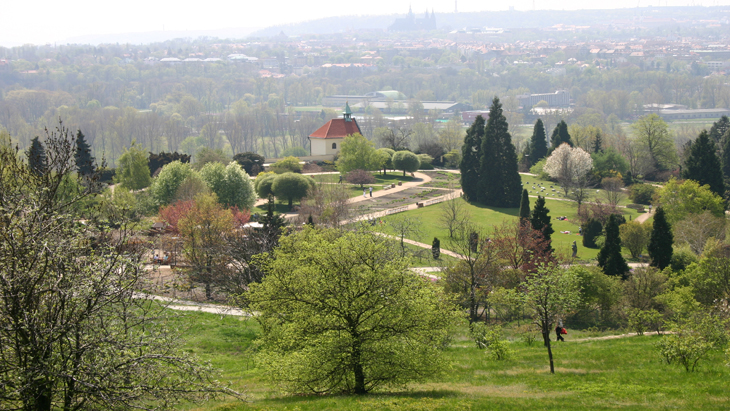 This lovely garden, arranged as a park, invites its visitors to see and enjoy open air exhibits, the historical vineyard of St. Claire, Japanese Garden, tropical greenhouse Fata Morgana. In addition, numerous festive and educational events take place here throughout the year. Not to mention it is an oasis of calm and natural surrounding far away from the city’s noise.

The Botanical garden spreads over the Troja basin, it is approximately 70 ha big, the terrain is elevated 179 to 276 metres above the sea level. The plan for building a botanical garden was approved in 1968 and the garden was then realized according to the winning project of architects Josef Hrůza and Jiří Navrátil, and ing. J. Jager. However, until 1992, the garden was not generally accessible. The initial exposition was opened on a surface area of 3 ha and was arranged as a park with collections of small bulbous plants, perennials, annual flowers and healing plants, with a greenhouse with alpine flowers, and a department of dendrology.

Today, the area, which is open to public in the season, spreads over 4 ha, and apart from the original exposition, there is also a Japanese garden with original kinds of Japanese plants, a geographical exposition of plants from Turkey and the Mediterranean. In 2003 a new tropical greenhouse, Fata Morgana, was built in the garden. It is divided into three parts - succulents, central-American savannah, Madagascar and South African semi-desert - tropical rainforests - artificially cooled greenhouse - the environment of the Andes and the Cape, Tasmania, New Zealand. The Garden is under continuous development, new expositions are emerging.

The garden is not only a source of learning for the public, but also a source of dealing with issues of protecting natural sites of certain kinds of plants. “Southern Grounds” is worth seeing for its open space exhibition of the Japanese garden and St. Claire’s Vineyard, “Northern Grounds” feature a Peony meadow and a collection of frost-hard cacti, nicknamed “Mexico”.  In the vicinity of the garden, you will find the world-famous Prague Zoo and the gorgeous Baroque Troja Chateau with its ornamental garden and wine cellar.