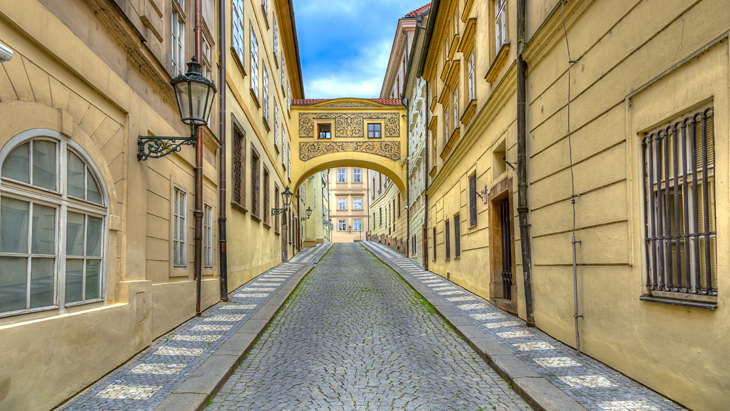 Thunovská Street connects the western part of the area of the Church of the Virgin Mary with Tomášská street on the east side. Connected to it are also the castle stairs leading to Hradčasnké Square. It measures about 350 meters. The current name of the street, which has been officially in use since 1870, was derived from Thunovský Palace, No. 180/14, which is currently used by the British Embassy.

In the past, this place was called a Kavčí Mountain. In the 14th century the street was called ‘Pod Stupni’ - Below the Stair, after the stairs that led to the Prague Castle. In the 18th century, the lower part was called Sklenářská (Glassworker Street) after the local artisans, and also Farní (Vicarage Street), after the Vicarage of the St Nicholas Church.

Thunovská Street is one of the most impressive places of old Prague since its medieval character was preserved. It is arched with three arches in three different places and it used for vehicular traffic only partially. It is mostly used by tourists as an access way to Prague Castle.