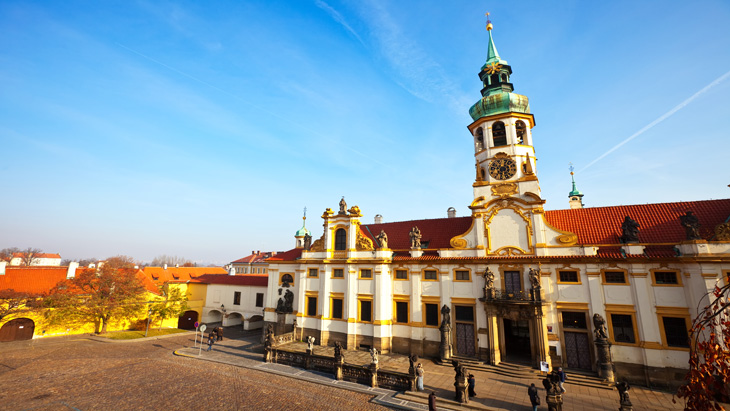 Probably the most touristy area of Prague, the area surrounding the Prague Castle boasts some of the most charming buildings and squares in Central Europe, including the Loreta Square.

Located just a few steps from Hradčanské Square it was founded during construction of the Czernin Palace. It is crowned by the world-famous pilgrimage site of the Loreta complex, dominated by its Loreta Church. Loreta Church is also famous for being the final stop on Prague’s Epiphany Procession of the Three Kings in January, during which gifts are presented to the Infant Jesus, and then collected and given to charity. The nearby Czernin Palace is the most fascinating of the many palaces in the vicinity of Hradčany.

Built in early Baroque style for the Imperial Ambassador of Venice, it later became a fortress for the French and Bavarian armies during the Austrian Succession war. It was also used as the headquarters of the Nazi SS. The beloved son of Tomáš Garrigue Masaryk, Jan Masaryk, died in the Czernin Palace under mysterious circumstances.

Other attractions not the be missed on a visit to the Loreta Square include the Renaissance arcades and breathtaking frescoes, Bohemia’s first Capuchin Monastery with its lovely Capuchin Church of Our Lady of the Angels. There is no better place to end your trip to the Loreta Square than at the traditional Czech pub U Černého Vola, located directly in the Loreta Square, which will enchant you with its authentic atmosphere and friendly prices.