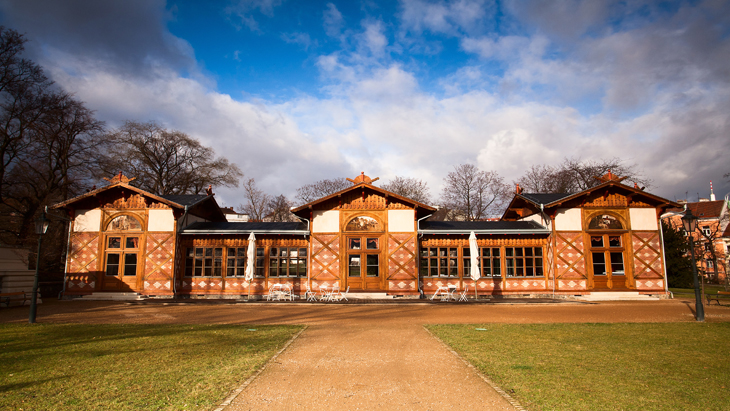 Havlíčkovy Sady, Prague’s second largest park, is located in Vinohrady district, Prague 2, and was established as an original part of the newly built estate of a factory owner Moritz Gröbe. The former estates were Lower and Upper Landhauska and he had a two-stories villa built in new-Renaissance style in 1871 - 1888 in place of Upper Landhauska. It was built according to a project of Antonín Barvitius in cooperation with the architect Josef Schulz, who mostly worked on the building’s interior.

The residential house at Lower Landhauska was preserved, but modified in new-Renaissance style. So is the look of surrounding premises inspired by new-Renaissance style - there is a terrace and staircase leading to the vineyard, grotta, theatron with a fountain and water cascade, a pond and waterworks, pavilions and statues by Bohuslav Schnirch (who also created the sculpture groups on the roof of the National Theater). Since it  was too costly for Gröbe’s heirs to keep the estate running, they first rented it and in 1905 sold it to the town of Královské Vinohrady, and on 16th May 1906 it was opened for public under the name of Havlíček Park.

Until World War II, the garden was well kept and locked for the night. However, the bombing of Prague in 1945 damaged the villa, the entrance gate, the small zoo, and the garden became freely accessible and unfortunately, the historical value of the park was gradually destroyed, due to the lack of finances for maintenance, but also due to vandalism. However, in 1964, the area was declared an immovable cultural monument. The place offers a great natural diversity - there is a big assortment of woody plants - up to 120 kinds.

The park is still an attractive place with picturesque corners and nice terrain, good for jogging. Noteworthy is also the vineyard, which was established in places of a former terrain shift. It was used for growing wines such as Frankovka, Burgundy wine, St. Laurent wine, Portugal, Riesling, Traminer and Silvaner. Unfortunately, at the end of the war, the vineyard was damaged and it dilapidated until 1993, when the Prague 2 municipality became its owner and since 1997, there is the Vinohrady vintage celebration held annually. The wine that the vineyard produces was awarded a certificate from an expert committee. The vineyard makes, among others, Müller - Thurgau, Pinot gris and Pinot noir and its annual wine production amounts to 4,000 litres.