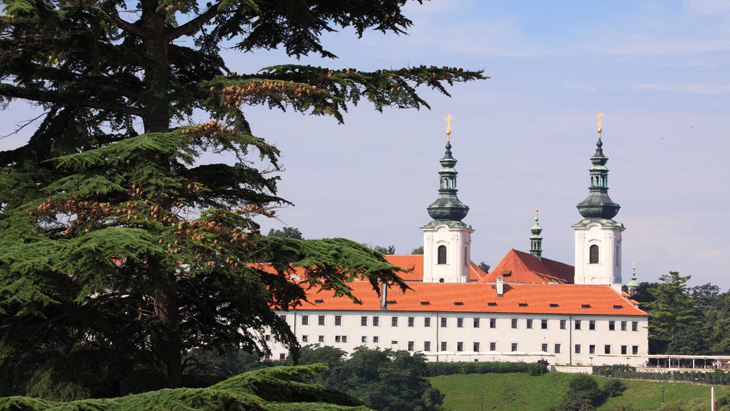 The Strahov Monastery, founded in 1140 by Prince Vladislav II, is a large, magnificent building located at the back of Petřín Hill and Prague Castle. It started its long itinerary through history with establishment of the Premonstratensians, a religious order of canons founded in 1120 by St Norbert as an independent part of Catholic church.

Later in 1182, a Romanesque stone monastery was built on the place of the older foundation. However, in 1258, it was destroyed almost completely by fire, then rebuilt in the Gothic style, but Baroque retouched were added at the beginning of the 18th century.

In the meantime, the abbey was plundered by the Hussites and by a regiment of the Swedish army during the Thirty Years’ War. In 1742, the church’s premises were bombed by the French. The abbey was returned to the Premonstratensians in 1989, after the Communist regime had ended.

The Strahov Monastery is not only a place of pilgrimage but it also offers visitors a calm oasis to stroll around and enjoy the view over the Lesser town. It is also a valuable museum and a famous library, which is located in the theological and philosophical halls. It is over 800 years old and comprises one of the oldest monastic collections which holds 16 000 books.