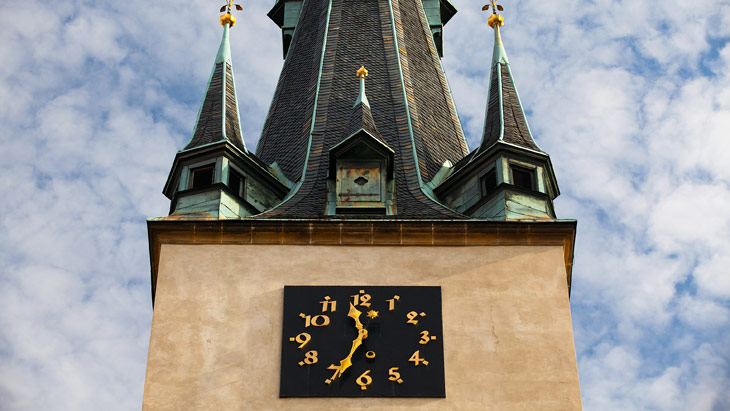 Situated in the New Town in Štěpánská street, this gorgeous church was founded and administered by the Knights of the Cross from the Old Town. The construction of this Gothic three-aisled building started in 1351 but was carried out in several stages, with the completion of the nave in 1392 and of the church tower in 1401 as a dominating factor of the whole construction. Later, in 1686, a Baroque chapel was built on the south side, and in 1736, the Bramberg Chapel was built on the north side. The latter boasts with a painting of the Last Judgement and remains from the former cemetery.

The steeple on the west side, which is 57 metres high, is a distinctive point on Prague’s skyline. It is divided by four band cornices and lies on a cubic pedestal with a single profiled cornice. The top of the tower has a New-Gothic helmet, which together with a high pyramidal roof and corner turrets was designed by architect Josef Mocker in 1875 during the significant New-Gothic renovation of the church. Interestingly, the interior of the church was preserved in its original Gothic style supplemented with a Renaissance organ loft. The paintings of distinguished painters of the time Karel Škréta and Václav Vavřinec Reiner can be seen on the altars.

The late Gothic bell tower stands behind the church and is a detached double floor building. In 1738 the most famous Czech Baroque sculptor Matyáš Bernard Braun was buried in the Church. In addition, the church is significant for the history of Czech music, not only was Zdeněk Fibich the director of the choir here but also, the three greatest Czech composers – Bedřich Smetana, Antonín Dvořák and Josef Suk had their wedding here.