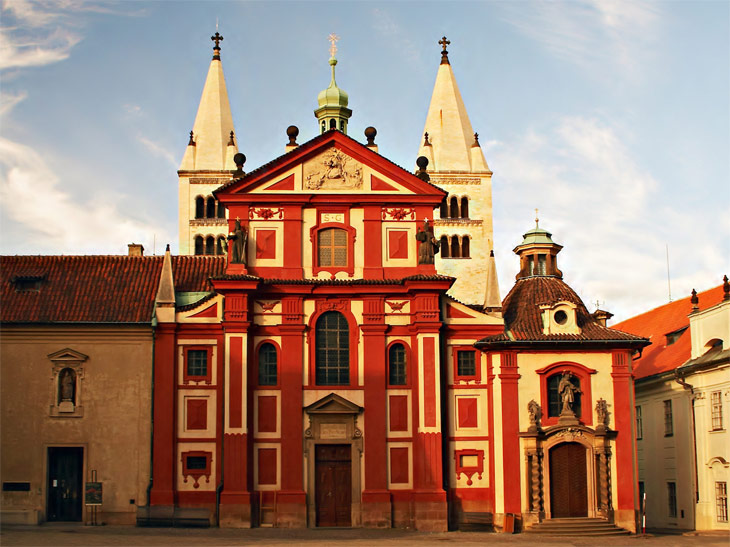 St. George’s Basilica originated as the second church at Prague Castle, but only the foundations of the building have been preserved. The basilica was founded by Prince Vratislav in 920, and reconstructed and enlarged in 973 with the construction of St. George’s Benedictine Convent.

It had to be rebuilt in 1142 due to the devastating fire and the striking Baroque façade that we see today was added in 1671-1691. Thus, the Romanesque appearance of the church with main apse and two steeples dates from the time of the reconstruction. Later, in the first half of the 13th century a chapel consecrated to St. Ludmila was added to the church as well as a portico on its western side.

Distinguished architect F.M. Kaňka added the Baroque Chapel of St. John Nepomuk to the church. The church was devastated again by the occupation of the convent by troops in the late 18th century and renewed in the years 1887 to 1908 according to the design of F.Mach, who managed to restore its Romanesque appearance. Today, the convent houses the exhibition of old Bohemian art of the National Gallery collection. The interior of the basilica is impressive with it ceiling made of deep, dark wood, which height is accentuated by the fairly narrow width of the church and the decorative windows in the stone walls create atmospheric lightning. Interestingly, the altar paintings and frescos in the dome are the work of another prominent Czech painter, Václav Vavřinec Reiner.

Within the church there are several tombs of historic importance; Prince Vratislav and Boleslav II are buried in the basilica along with many others. With its high ceiling and beautiful setting within Prague Castle it is also a wonderful venue for the early evening classical concerts.