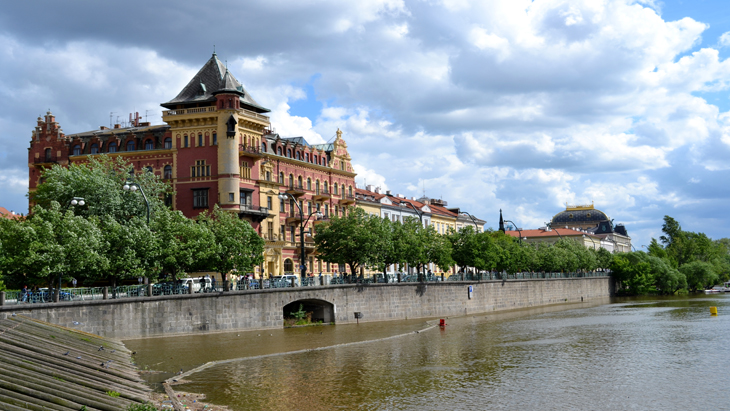 In comparison to other embankments in Prague, this one is by no means quite touristy ad lively. Designed between 1841-1845, it is the oldest embankment in Prague and runds from the Legion Bridge to Křížovnické Square by Charles Bridge.

It was originally called Old Town Embankment, later, in 1894 it was renamed to Františe Embankment and from 1919 it was called Masaryk Embankment. During World War II it held two names, between 1940-1942 it was the Vltava Embankment and then from 1942-1945 Reinhard Heydrich Ufer. It held the name of the first president of Czechoslovakia T.G. Masaryk again after the war, and later it got its current name – Smetana Embankment.

Named after Bedřich Smetana, a prolific and distinguished Czech composer, the embankement is an ideal area for strolls, relaxing, sunbathing and boasts with a magnificent view of Prague Castle, especially in the morning or evening, when the sun is low. At night this area becomes alive with clubbing as the endless number of bars and club open up to locals as well as tourists. You won't regret going out and spending the night dancing in one of the famous clubs.