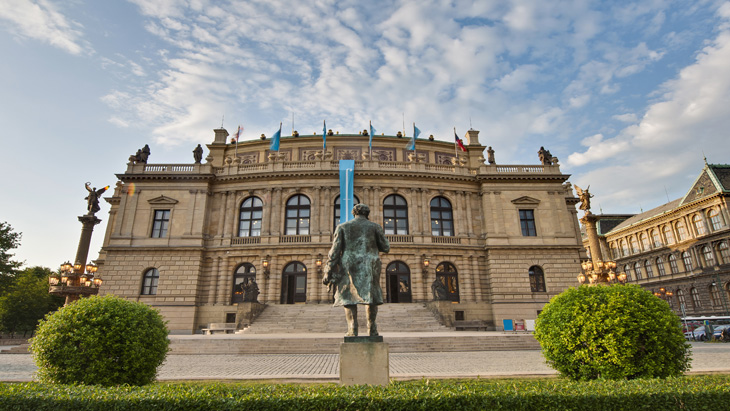 The building was built in the years 1876-1881 and the opening ceremony took place on 7th February 1885. Rudolfinum was built as a multipurpose cultural center with a concert hall and exhibition halls at the occasion of 50th anniversary of the Czech Savings Bank, which requested the building was named after the successor to the Habsburg throne, Archduke Rudolph.

The construction was entrusted to the architects Josef Zítek and Josef Schulz and was completed in 1881. In 1884 a concert hall Dvořák Hall was established. There are also two smaller concert halls - Suk Hall and Kubelíkova hall – mainly for chamber music.

After Czechoslovakia was established the building was known as the House of Artists. It has been modified several times in the inter-war period, even the Czechoslovak Parliament resided there  from 1919 to the 1941st. In 1920, 1927 and 1934 President of the Republic of Czechoslovakia Tomáš Garrigue Masaryk was elected there. In the axis of today's Dvořák Hall under the organ there stood a marble statue of President Masaryk by Jan Štursa, which is now located in Rothmayer hall in front of the Spanish Hall of Prague Castle.

In the postwar period, the building was headquarters of the Music Faculty of the Academy of Performing Arts and the Czech Philharmonic Orchestra. The most recent complete renovation took place in 1990-1992.