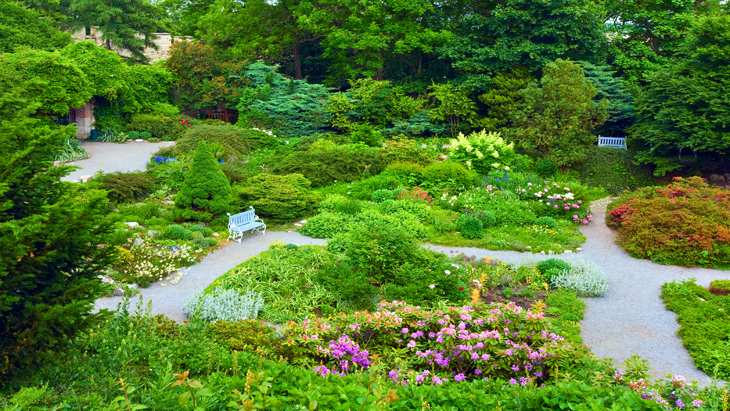 This lovely and picturesque garden is located at the Petřín Hill between the Baroque fortifications, Štefánik’s Observatory and the upper funicular station. It covers the area of around six hectares and stretches 320 - 328 meters above the sea level.

The Rose Garden is magnificent since in warmer months of the year it abound in flowerbeds with roses with their number reaching up to twelve thousand! With a number of benches set around this part is a popular place for relaxation, and also offers intimacy with a gorgeous scent of roses. Originally, this part of Petřín was covered with woods, but later the forest was replaced by vineyards and fruit trees.

Between 1932 - 1934 a Rosarium (a rose garden) in the shape of a rosetta and a fan was founded here. 8,000 roses of various shapes and species were delivered to be planted in the Rosarium. This project was followed by another one - they so called Květnice - numerous everlasting flowers and water plants were planted in Květnice and lawns all around were surrounded by a hornbeam hedge. As you get out of the funicular at the top notice the group of statues in embrace called Polibek (The Kiss) by the Czech architect Josef Mařatka from 1921.

Close to the Hunger Wall you will find Štefánik’s Observatory with a commemorative tree and a memorial to M.R. Štefánik and a sundial. Continue through the garden and you will get directly to the Petřín Lookout Tower.