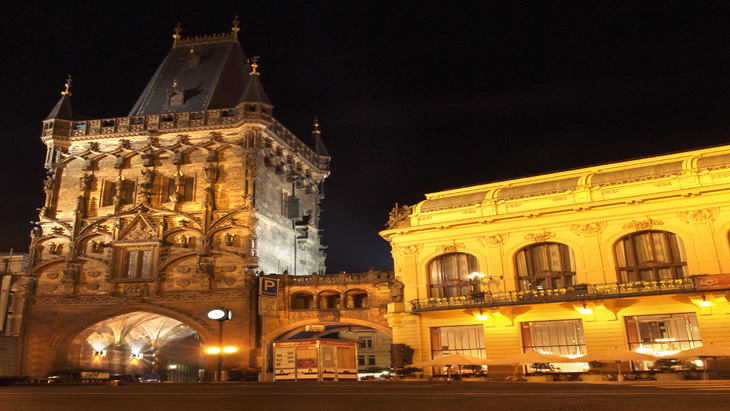 The construction of the 65m-tall Powder Tower begun in 1475 on the site of one of Staré Město’s original 13 gates. The kings of Bohemia used to enter the town through this gate on their coronation parade.

It was built under the reign of King Vladislav II Jagiello as a ceremonial entrance to the city, to contribute to the beauty of the Royal Court, but was left unfinished after the king moved from there to Prague Castle in 1483.

Together with the Old Town Bridge Tower, the Powder Tower is the only existing part of the former Prague Old Town fortification. In the 19th century the architect Josef Mocker rebuilt, redesigned and decorated the tower giving it a neo-Gothic look. The gate acquired its name in the 18th century when it was used to store gunpowder. To this day, there are many decorations on the tower, such as statues of Bohemian kings, patrons and saints.

There are 186 stairs in the spiral staircase, the gallery is 44 metres high and accessible to public. There is an interesting permanent exhibition on Prague towers inside and the gallery provides a spectacular view from the top.