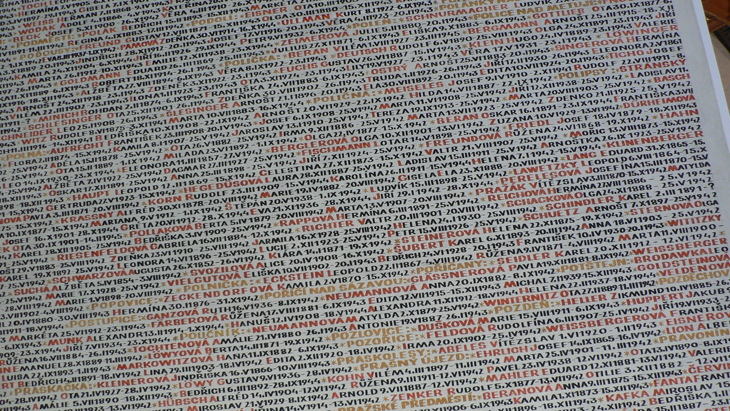 Jutting into the southern side Old Jewish cemetery is the Pinkas Synagogue, which today forms a powerful memorial to the victims of the Holocaust.

The structure was built for the Horowitz family in the 1530s and has changed its appearance many times since then. In 1958 it became a memorial to the 77,297 Czech Jews killed during the Holocaust but it was closed in 1967.

The synagogue was eventually restored in the 1990s, although little remained of the original building apart from the bimah, surrounded by a wrought-iron grille, supported by columns.

Most of all, the synagogue is known today for the Holocaust memorial: all the walls are taken up with names of Holocaust victims, giving their names, date of birth and date of death or transportation to the concentration camps. The memorial is the longest epitaph in the world but the total list of victims is much longer.

Upstairs, beside the women’s gallery, a room contains a very moving exhibition of drawings by children in the Jewish ghetto at Terezín, north of Prague.

The Pinkas Synagogue is covered by an all in-one ticket for all the attractions in the Josefov apart from the Old-New Synagogue.