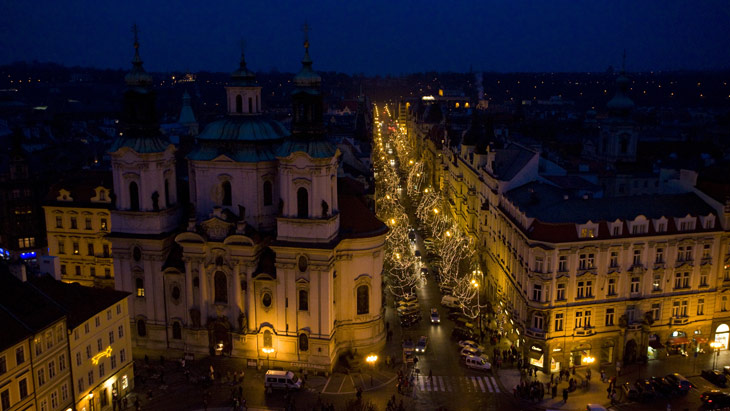 Pařížská is a street in the Old Town district of Prague 1, which connects the Old Town Square and the Curie Square. The street comes from the Old Town Square in the northern direction, intersects Josefov and ends on the bank of the river at Čechův bridge. Both pedestrian walkways are lined with trees, which is quite unique in the historical part of Prague (that can also be seen only in Wenceslas Square).

The street was the redevelopment of the Jewish town of 19th and 20 century and was originally called St. Nicholas avenue according to the church at the corner of Old Town Square. Since 1926 it takes its name after Paris, for it reminds of the Paris boulevards. However, in the original plans, it was supposed to become part of an avenue that would goes from the National Museum over Wenceslas Square, passing through the Old Town, Old Town Square, the Jewish Quarter today, Letná park to the building of the General Assembly and thus was to copy the Parisian Avenue des Champs-Élysées. However, the plan did not materialize due to lack of funds and the resistance of the population of the Old Town.

Today it is a very luxurious corridor with many fashionable shops and restaurants. There is a theater IMAGE, Restaurant Reduta or the hotel Intercontinental. Rental prices of apartments and shops in this street are among the highest in the city and together with the street Na Příkopě we can find it in the top rankings of dozens of the most expensive shopping streets in the world.