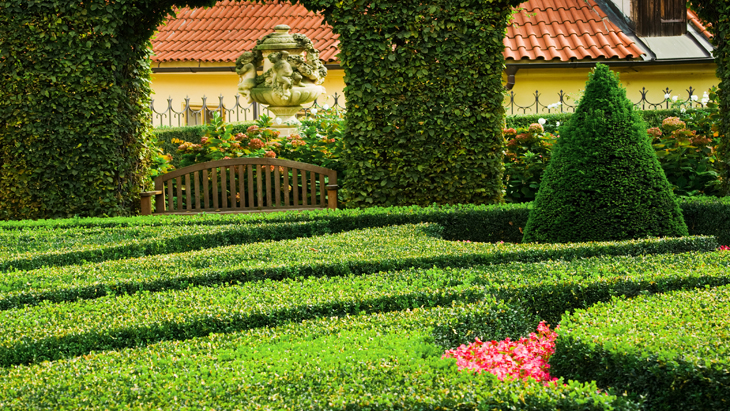 Paradise Garden or Rajská zahrada is the first garden upon entering the South gardens from the new Castle Stairs with a surface area of 0.38 hectares. Established in 1562 upon an order of archduke Ferdinand of Tyrol it served as his private garden. During the era of Rudolf II, the garden featured an aviary, a spa, and a tower for trumpeters. Later it was demolished and a round Renaissance pavilion with a turret was built - that was during the reign of Emperor Matthias in 1614. The turret, which has been preserved until today, is decorated by wall paintings by the prominent Czech painter Josef Navrátil from 1848.

There are paintings of 39 emblems of territories ruled by the emperor. There is an observation terrace under the pavilion, designed by the Slovenian architect Josip Plečnik, which features a statue of Good Shepherd by Josef Kalvoda from 1922. The monumental cascade staircase was built a year before that. Below the staircase there is a decorative bowl made of a single piece of Mrákotín granite (also designed by Plečnik). Its diameter is 430 cm; it’s 180 cm high, and weighs 50 tons. There is the an edge of the old Baroque fountain from 1713 behind the bowl.

Noteworthy is the oldest woody plant in the castle gardens: the evergreen Taxus baccata (English or European yew) to the right from the staircase. It is 254 cm wide in perimeter and 35 cm high and its age is estimated at about 400 years.