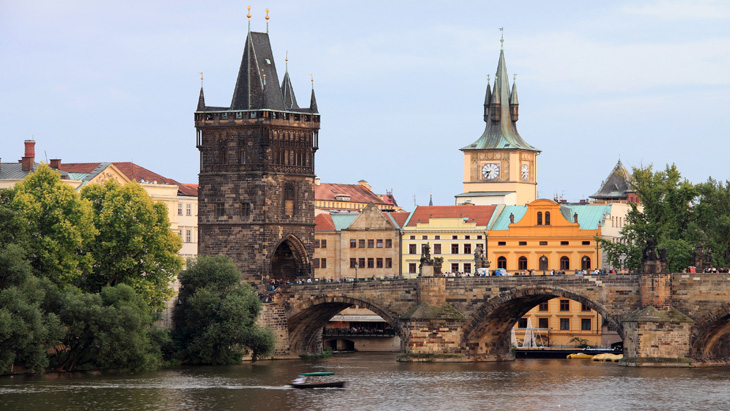 This high-gothic tower was designed, like the bridge itself, by the distinguished master architect Petr Parléř guarding one end of the Charles Bridge is one of the most exquisite examples of gothic architecture in Europe. Its foundations were laid together with the foundations of the Charles Bridge. The blackened gate was completed in 1380 and forms part of the old fortification system of Prague, built to protect the Old Town against northern invaders. However, it also has an aesthetic value and with its unique sculptural decorations is part of the Royal Way.

At the end of the Thirty Year War the western wall of the tower was heavily damaged by Swedish cannon fire. It was also here that the invading Swedish army was repulsed by a band of students and Jewish ghetto residents. Fortunately, the sculptures by Petr Parléř at the tower’s eastern wall survived and till today we can see a portrait statue of Emperor Charles IV and King Wenceslas IV with St. Vitus watching over them. On the floor below, there are statues of St. Sigismund, the patron saint of Luxembourg, and St. Adalbert, the patron saint of Bohemia. At their legs, there is the statue of a lion, which looks down from the tower.

A symbolic apparition occurs on St. Vitus’ Day, 15th June, when the shadow of the lion falls on an escutcheon below it, which depicts an eagle - this symbolizes the link between Bohemia and Moravia. To find out more about the astronomical and astrological symbolism of Charles Bridge and the bridge tower visit the small exhibition on the 1st floor of the tower. Climb the 138 stairs for a bird’s-eye view over Charles Bridge, the Vltava River, the Old Town, the Lesser Town and the Prague Castle.