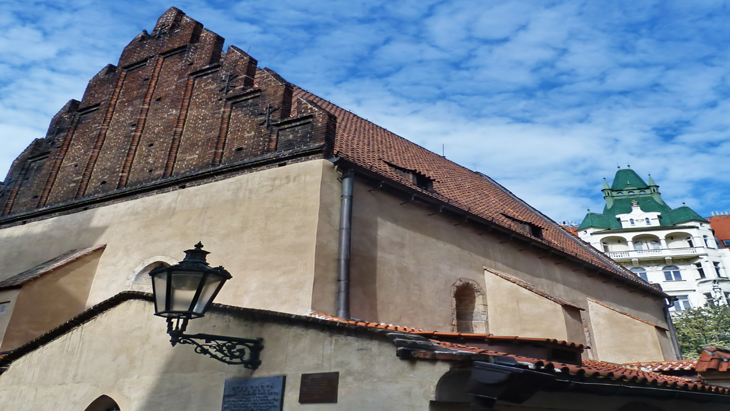 With ancient brick walls and steep gables, in striking contrast to the Art Nouveau buildings close by, the Old-New synagogue dates back to the second half of the 13th century. It is Europe’s oldest working synagogue and the most famous of Prague’s synagogues.

The building itself is Gothic, one of the earliest buildings in this style in the Czech capital. As Jews could not become architects at that time, it is thought that the synagogue is the work of Franciscans who were working on the convent of St Agnes nearby. The unique rib-vaulting, has an extra, decorative, rib, designed to avoid any suggestions of a cross.

The main entrance is elaborately carved with twisting branches of vines, the 12 bunches representing the 12 tribes of Israel. Inside, in the main hall, visitors can see a bimah, surrounded by a wrought-iron cage, and the remains of a flag bearing a Star of David, dating from the period when Emperor Charles IV allowed Prague’s Jewish community to fly its own standard.

The Old-New Synagogue is closely associated with the legend of the Golem, a mythical figure made of unformed matter. The story goes that Rabbi Löw created a giant servant made from the mud of the River Vltava. It was brought to life when the Rabbi placed in its mouth a tablet with a magic Hebrew inscription. Things eventually went wrong when the Golem ran amok and the Rabbi had to leave the service to stop the creature, by removing the inscription, or shem, from its mouth for good. He is said to have placed the remains of the Golem in the attic; some say they are still there.

Male visitors are asked to cover their heads and the ticket office gives out paper skullcaps. Tickets for the Old-New Synagogue must be bought separately and are not covered by the joint ticket for the other sights in the Jewish Quarter.