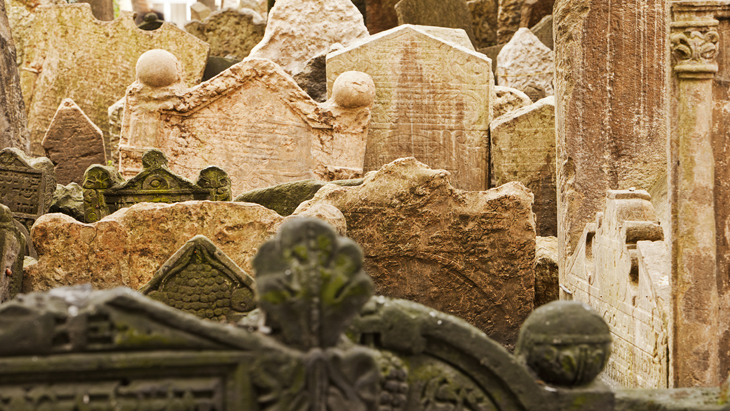 The centre of Josefov is the Old Jewish Cemetery, one of Prague’s most picturesque, fascinating and moving sights. Despite its location beside a busy thoroughfare, the cemetery is an oasis of calm and feels like a world within a world. It is a good idea to visit as early as possible, before the graveyard becomes too busy.

The cemetery was established in the 15th century and was used until 1787, when the number of graves had reached a staggering 100,000, one on top of the other, six palms apart and up to 12 layers deep. The oldest grave dates from 1439 and is that of Avigdor Karo, who recounted the story of the 1389 pogrom. The grave of Rabbi Löw, who created the mythical Golem figure, is by the wall immediately opposite the entrance and is near the Renaissance tomb of wealthy Mordecai Maisel, who was finance minister under Habsburg Emperor Rudolf II.

Each headstone features a symbol that denotes the profession or tribe of the dead person, such as hands for the Cohens or a pitcher and basin for the Levites, and a violin for a musician. Many gravestones bear pebbles, following the Jewish tradition of commemorating the dead with stones rather than flowers.

Because the cemetery has become a huge tourist attraction and receives large numbers of visitors, the graves are now roped off to protect against damage. A one-way system through the graveyard has been introduced. The cemetery is covered by an all in-one ticket for all the attractions in the Josefov apart from the Old-New Synagogue.