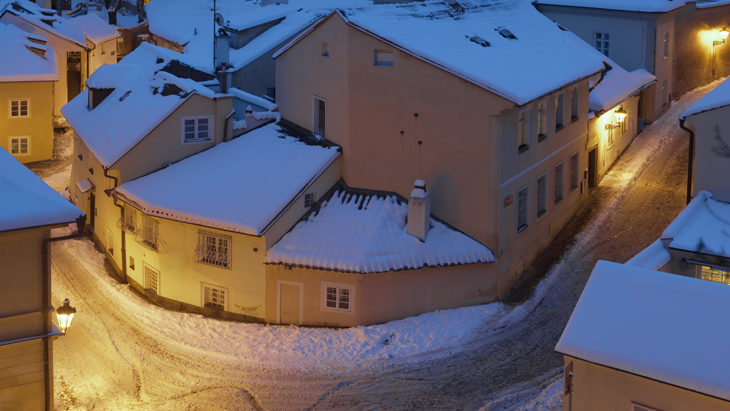 This charming place that has attracted many artists and romantics soles is actually a small lane hidden in the vicinity of Prague Castle. This narrow street with small houses starts at the base of a mammoth fortification wall and runs to the green Stag Moat of the castle and creates a romantic atmosphere in any season of the year. Moreover, you will be taken away with the oasis of calm as this is a one of the few places in the Prague center away from the tourist crowds and hustle.

Like many old streets in Prague, the street is beautifully cobbled and there is an old wall lined up on the one side and cute pretty houses on the other. The houses were originally built in the mid-14th century to provide accommodation for the castle workers and with their low doorways, arched ceilings and other interesting touches are certainly a unique piece of architecture. Notice the house signs, which people used to put above the door to identify their houses.

The street used to be a home for two famous people. The house no. 1 called At the Golden Griffin used to serve as a home for the famous Rudolf II’s astronomer Tycho de Brahe and the house no. 25 called At the Golden Plough would be the home of the great Czech violin virtuoso František Ondříček. The street gradually became a favourite place of artists and you should certainly give in the temptation to visit one of the little cafés to soak in the atmosphere of the old historical Prague.