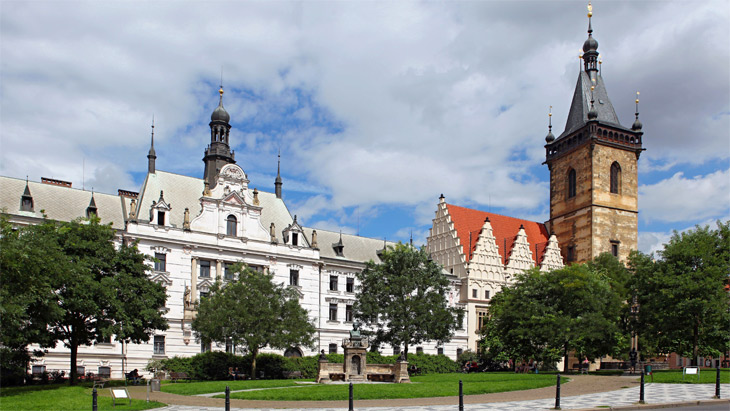 Built in the late 14th century, the New Town Hall is the historical focus of Charles Square. The most noticeable part - the high tower with a big bell and a chapel inside -  was not built until 1456.

The New Town Hall used to be the seat of the municipal administration of the New Town until 1784, when the four Prague towns – Old Town, the Lesser Town, Hradčany and the New Town - were connected into one town council. After that, the New Town Hall served as a criminal courthouse and a prison with a torture chamber.

The New Town Hall is famous for the “defenestration” event that happened in the 15th century. From the window of the main hall, two Catholic councilors were flung to death in 1419 by followers of the Hussite preacher Jan Želivský, the word “defenestration” (throwing out of a window) gaining a political meaning; the event triggered the anticipation of the Hussite Wars.

Today, the New Town Hall is a national heritage and serves for many cultural and social events. The Gothic Hall of Justice – the site of the defenestration - is accessible to public and offers the authentic experience of climbing the 221 steps to the top of the tower.