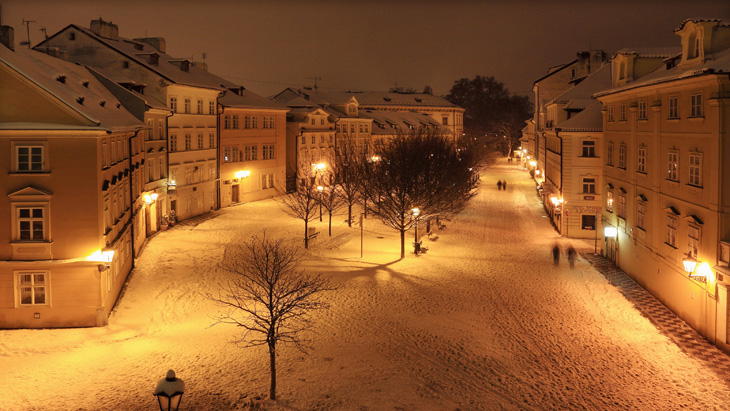 When you stroll on Charles Bridge and look down to Kampa Island you will see the Na Kampě street or more of a large park really, which is a truly amazing combination of culture and entertainment, popular among the locals. There is a breathtaking view of the river and the other side of the river.

Kampa is an island in the Vltava river in the central Prague on the side of Malá Strana. Charles Bridge crosses its northern tip and is connected to the island by the street Na Kampě. It is separated from Malá Strana by a narrow artificial channel to the west called the Devil’s Stream (Čertovka), originally a waterway dug to power watermills. Most probably the area was named in the 17th century as the campus (“field”) by the Spanish soldiers, who camped here during the Battle of White Mountain.

Today, Kampa is the site of various cultural events such as open-air exhibitions (such as the “babies” by the controversial and prominent local artist David Černý) and concerts throughout the whole year.

The must visit café/bar is Mlýnská kavárna, situated inside what used to be a water-mill with an interesting interior, cool vibe and a charming little backyard. In the sunny days, you can get your drink in a plastic cup and sip it sitting down on the grass. Another essential attraction is the Museum Kampa, a modern art gallery showing central European and especially Czech work, which with its exterior design ranks between one of the most intriguing modern buildings in Prague. The works belong to the private collection of Meda and Jan Mladek and is housed in Sovovy Mills on the eastern bank of the island.