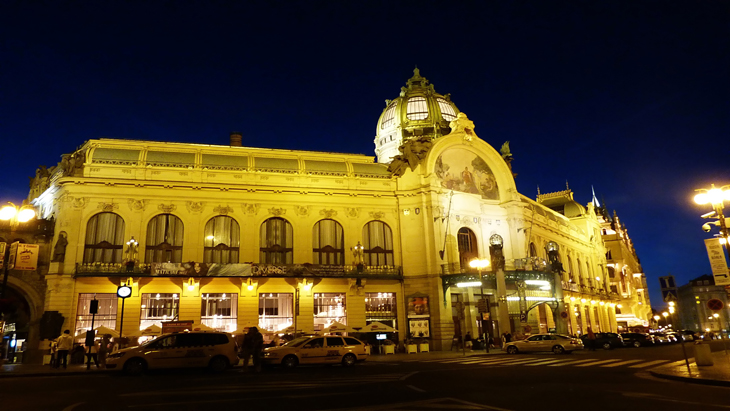 Municipal House is the city's foremost Art Nouveau buildings as well as one of the most beautiful across Europe. This magnificent complex of rooms has a multifunctional purpose. Out of the many attractions Municipal House provides is an elegant French restaurants, a typical Czech restaurants, a fancy café, the first American bar in the Czech Republic, or several music salons.

The pride of Municipal House is no doubt Smetana’s concert hall at its heart. Municipal house opened in 1912, and was constructed on the site of the former Royal Court Palace. It became renowned after the 28th October 1918 - on that date the historic proclamation of the independent state of Czechoslovakia took place here. Located on Republic Square, Municipal House stands right next to the Powder Gate, one of the original entrances to Prague’s Old Town. Both the Old Town Square and Wenceslas Square are just a stone’s throw away.

The exterior is magnificent with its intricate stonework, gold trimmings, frescoes and stained glass windows. Inside, walk up a marble staircase to the huge Smetana Concert Hall, a rival in size by the Dvořák Hall at Rudolfinum. The magnificent interior of Smetana Concert Hall boasts a mix of carved white stone and gold, illuminated by countless lights, and frescoes by Karel Spillar. Some of the largest orchestras played in Smetana Concert Hall and no wonder, Municipal House is home to the Czech National Symphony Orchestra. Municipal House also hosts exhibitions and even balls occasionally.