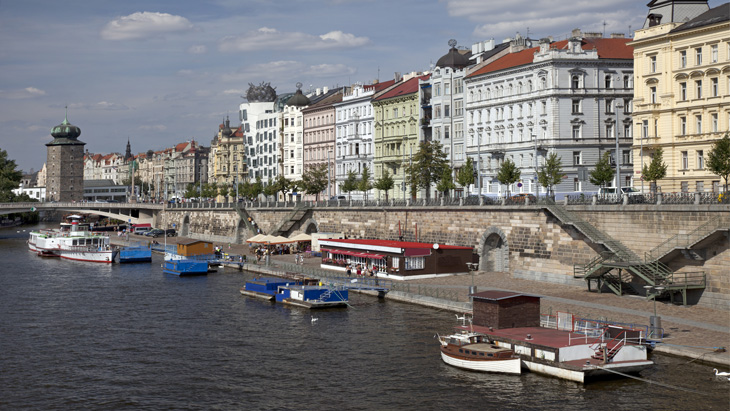 The Masaryk Embankment stretches from the Jirásek Bridge to the National Theater. From the embankment you can get to Slovanský Island, which is situated nearby in the middle of Vltava River.

Until the end of the 19th century there was no regulation on this part of the river and it was used by millers and curriers. In 1903, part of the embankment was completed and together with part of today's Smetana Embankment it was called František Embankment. From 1912 until 1940 it held the name of a Czech politician and publicist: František Ladislav Rieger. During World War II the whole embankment along the river was renamed to Reinhard Heydrich Ufer.

After the war in 1945, it was changed back again to the Rieger Embankment, however, only a year later it was renamed again, after the Communist president Klement. It was only after the Velvet Revolution that the embankment was given the name of the first president of Czechoslovakia, Tomáš Garrigue Masaryk. The above mentioned Slovanský ostrov is one of the attractions in the area. The island is ideal for strolling around, relaxing with a glass of cold beer while having a magnificent view on Prague's sights. Moreover, the island is one of the places that offer a paddle boat rental.