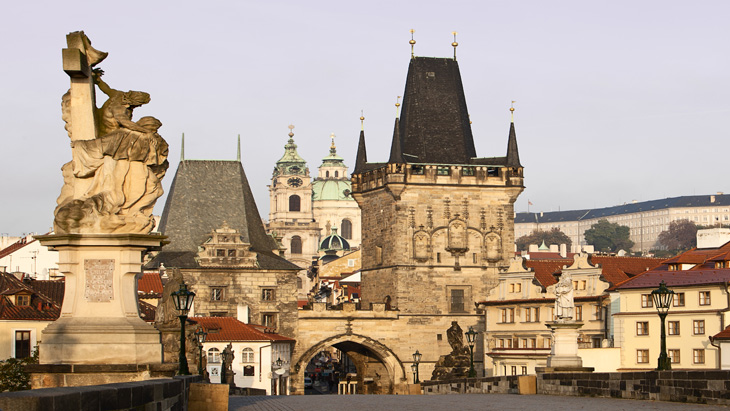 Situated at one end of Charles Bridge, the Lesser Town Bridge Tower is the ancient gate to the Lesser Town. The tower at the western end of the bridge actually comprises two towers of different size , origin and appearance. The smaller tower was built in the Romanesque style, is older of the two and is the only remaining part of the original Judith Bridge, which stood on the site of Charles Bridge and was  Prague’s first stone bridge built in the early 12th century but destroyed by the flood in 1342.

The taller tower began to be built together with the Charles Bridge in 1357; the Old Town Bridge Tower, constructed earlier on the opposite of the bridge, was used as a model. However, the tower was only completed a century later under the reign of George of Poděbrady. It is connected to the smaller tower by a gate dating from the beginning of the 15th century. From the early 15th century for about two hundred years, the smaller tower or the so-called Judith Tower served as  a jail.

The entrance to the tower is from the passageway of building no. 56 - at the time the headquarters of the Prague Bridge Authority. The tower was later refurbished in Renaissance style, however, an important set of engravings, which depict human figures, animals and weapons and are from the mid 13th century has been preserved in the tower’s vaults. The higher tower is part of the entire Charles Bridge and served as a storehouse and a watchtower. Climb the stairs to the top for a great view over the Lesser Town, Charles Bridge, the Vltava River and across into Prague’s Old Town.