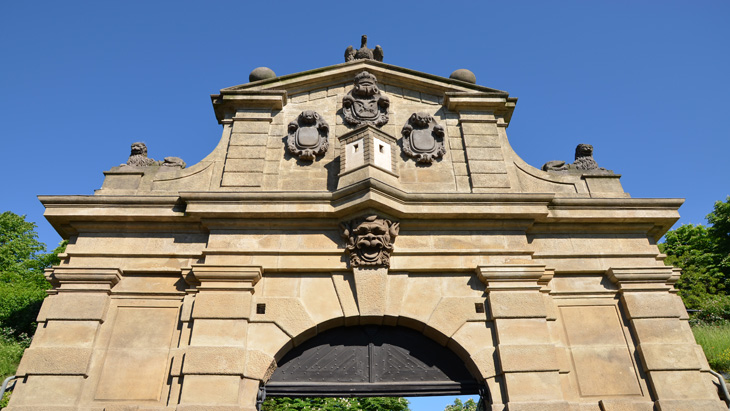 Leopold's Gate is the most beautiful preserved Baroque gate from Prague fortification. It was built between 1653-1672 according to a design by the famous architect Carlo Lurago. The gateway has a central passage and two smaller side passages for pedestrians. Around 1840 it was adjusted to operate and probably from this period comes the entire door mechanism with pulleys. The gate is decorated with pilasters and shield characters by Giovanni Battista Allio. Even today you can see the double pulley holes, with which the drawbridge was controlled.

The bottom openings are from the original bridge. From the military perspective the gate had never been completed and one had to climb to the shooting chamber up the ladder or from mobile platforms. Like the whole Vyšehrad area so is the Leopold Gate shrouded in legend. Whenever there was a full moon, it was skirted by the ghost of a French major, who was tragically killed here, when Vyšehrad was occupied by the French army. In addition, his was said to choke the soldiers, who stood sentry here and the bullets shot  at him ejected flew through his body. Thus, the soldiers who kept sentry here were full of horrors.