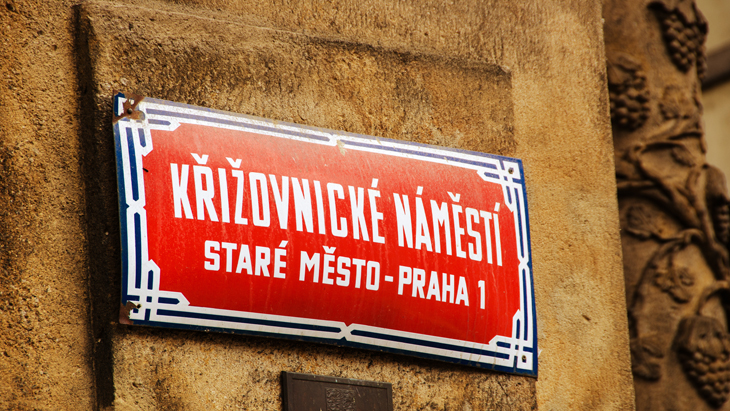 The square, today buzzing with tourists walking from the Old Town to Prague Castle over Charles Bridge, is one of the smallest squares in Prague. It originated in 1847 with the demolition of a vintner's lodge and the coverage of the shoulder of the Vltava at this location. It is situated near the Old Town Bridge Tower and provides an excellent view across the Vltava River.

A monument honouring Charles IV as the founder of the University of Prague stands in the middle of the square; it is a Neo-Gothic statue of Charles IV leaning against a sword and holding the deed of foundation of Charles University in Prague. The statue designed by Ernst Julius Hahnel was erected in 1848 at the occasion of the 500th anniversary of Charles University. Allegories of the historical university’s faculties of theology, medicine, law and philosophy sit atop a pedestal. Only the vine column is what was left from wine bureau seating in Knights of the Cross Square in 1358 – 1783. It was responsible for the whole administrative concerned with growing vine. On the top of the column you can see the statue of St Wenceslas, who is the patron of winegrowers.

Interestingly, around the column you can also see the remains of the original paving of former Judith bridge, which stood on the sight of today’s Charles Bridge. On the north side of the square you will see the Church of St Francis built by the Knights of the Cross with the Red Star in the 17th century. The architecture of this Baroque church with an impressive dome has been exemplary for many other architects. Another dominant of the square is the Church of the Holy Savior, part of the large Clementinum complex. The church, built in the late Gothic style, used to be a mint and the interior was full of machines for coining.