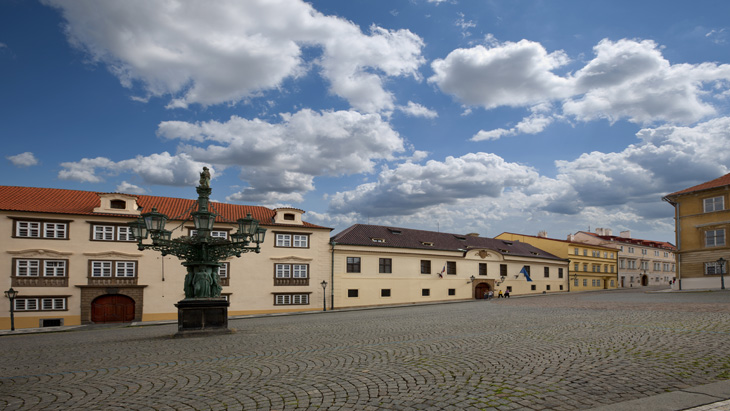 The Hrzán Palace is less noticeable than many of the buildings nearby, but it is much larger than it looks. From Loretanská street it appears to be a two-storey building, but when you see it from Úvoz, you will notice that the palace is in fact a five-storey structure, due to the slope on which it stands.

The palace goes back to the medieval period, when a Gothic structure stood on the site. Petr Parléř, the architect of St Vitus Cathedral, owned the palace for a short period, and it changed hands numerous times over the centuries. In the 1950s, during the Communist era, it underwent extensive remodelling to make it suitable for government and ceremonial purposes.

The Hrzán Palace is also associated with a number of important Czechoslovak figures of the twentieth century, most notably Tomáš Garrigue Masaryk, the much revered first president of Czechoslovakia, and his American wife, Charlotte Garrigue Masaryk. They lived in the palace from 1894 to 1895. It was also home to artist Jan Slavíček, who lived there until his death in 1970. Several of his works were painted from the windows of the Hrzán Palace.

Today, the palace is part of the Czech Foreign Ministry and is not open to the public.