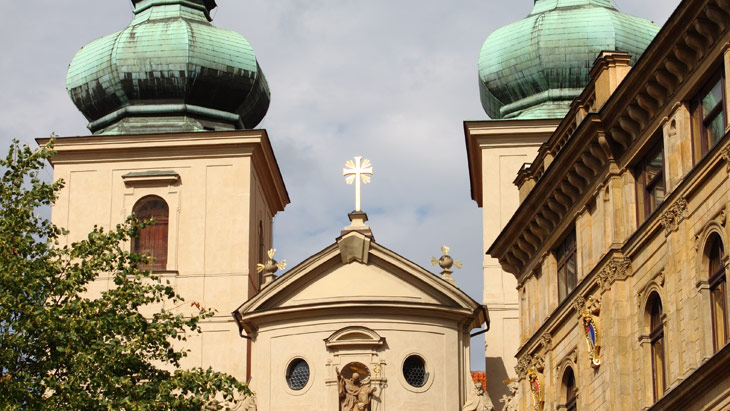 The street, located at the Ovocný Market, in the vicinity of Old Town Square, dates back to the 13th century, when St Gall’s Town was founded. It is about 250 m long. Along the town’s northern side there used to be a row of houses with arcades. Most of the houses have been rebuilt, although in the part from Melantrichova Street to Uhelný Market some houses have been preserved.

Located in the former New Market, on the site of which in 1362 there appeared many little shops of furriers, drapers and other craftsmen. The street’s name is derived from the St. Havel church. In the 15th century, part of the street was called Tandlmark, or Tarmark, which meant there were second-hand wares sold there.

In the first half of the 18th century, one half of the street was called Uhelný trh (Coal Market) and the other half was called the Green market since there were vegetables and flowers sold there. Name Havelská Street was officially introduced in 1870.

Today, there is the city centre’s permanent market, open daily, which attracts  tourists as well as locals, who come here to shop for fresh fruit and vegetables. The market also sells flowers, arts and crafts, leather goods, wooden toys, ceramics and other authentic souvenirs. While the shops on either side of the street sell ordinary souvenirs, the market stalls are worth a quick browse for an original gift such as fresh honey or sweets.

Havelské Market is located on a pedestrian route in between Wenceslas Square and Old Town Square, a few minute walk from either square.