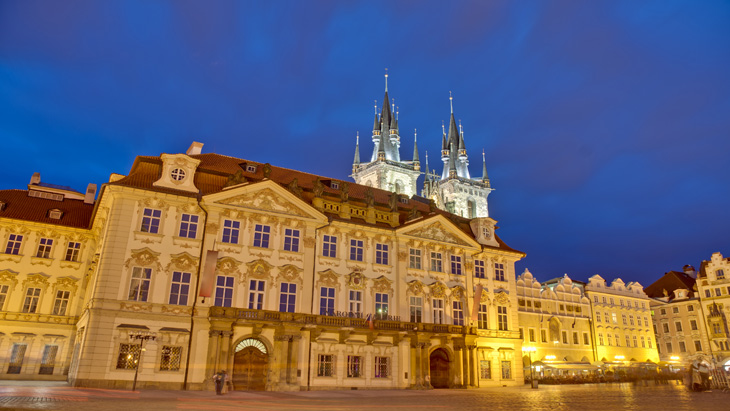 No visitor to Prague should miss Old Town Square, which is packed with important historic buildings, including the Goltz-Kinský Palace.

The striking pink structure was built between 1755 and 1765 for nobleman Jan Goltz-Kinský. Kilian Ignaz Dientzenhofer, who designed many of Prague’s Baroque buildings, was the architect. The palace stands next to and almost overshadows a much earlier structure, the Gothic House at the Stone Bell; the story goes that Goltz-Kinský bribed officials to allow his palace to stand out from the other buildings nearby.

The Goltz-Kinský palace is known for its associations with historical figures, including writer Franz Kafka, who attended a grammar school in the building. The ornate balcony is also notorious as the place where Klement Gottwald, the “First Working-Class President of Czechoslovakia”, announced to his countrymen that Czechoslovak had become a Communist country. On the same day 42 years later, Václav Havel, the last president of Czechoslovakia and former dissident, declared that Communism was well and truly over in the country.

The Goltz-Kinský Palace is now part of the Czech National Gallery and formerly housed a collection of graphic art. It now contains a permanent exhibition on the art of Asia and the Ancient Mediterranean.