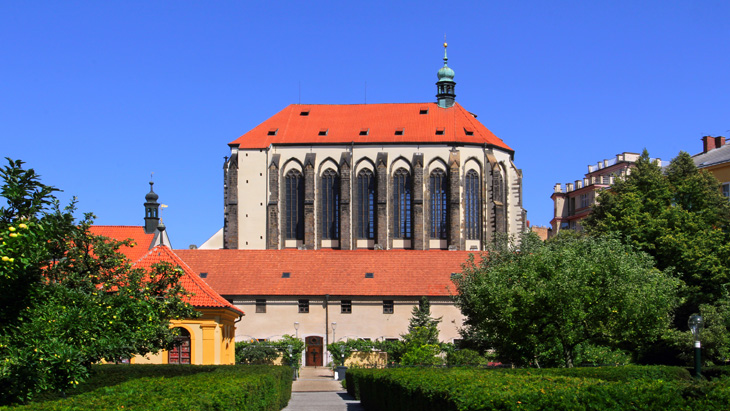 Tucked between Wenceslas square and Jungmannovo Square in the heart of New Town, this picturesque Franciscan Garden is an oasis of calm. If you feel tired of the crowds in the center of Prague, this garden, used by many locals as well as visitors to the city, is a lovely setting to sit and relax or eat ice cream that you can buy in adjoining passage Světozor. It also offers a pleasant alternate route if you want to avoid the bustling city center street. The set of cute white benches, pretty flowers and a children’s corner will make you forget how close you are to the busiest streets of Prague. This lovely garden in the vicinity of the Church of Our Lady of the Snow was built in 1348 during the reconstruction of New Town and used to belong to the Carmelites.

The Franciscans, who got the garden into their custody in 1604, grew flowers, trees and spices there. Unfortunately, later the Franciscans were displaced from the garden by the Communists in 1950 but soon after the garden became open to the public. Noteworthy is the new gate at the entrance from Wenceslas Square, built after the reconstruction in 1989-1992. The gate depicts 16 plastic scenes of the life of St Francis of Assisi made by Karel Císařovský. Today a small part of the garden belongs to the Franciscans again, who were given their property back after the revolution in 1989. Another interesting feature of the garden is the original early Baroque arbour, which these days houses a hip fashion shop.

The garden’s several paths aligned by rose bushes with benches alongside connect the three entrances.