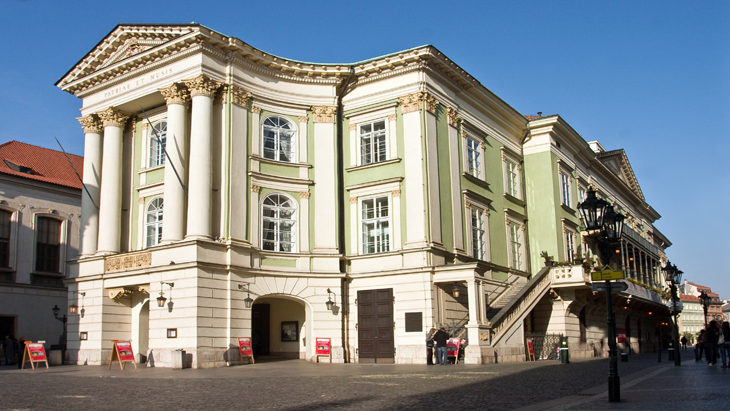 One of the most famous landmarks in Prague’s Old Town, the cream and green Estates Theatre is one of the city’s leading cultural venues and is also well-known for its associations with composer Wolfgang Amadeus Mozart.

The first theatre in Prague was established between 1724 and 35 by Count Sporck, followed by another theatre known as the Kotzentheater, which closed in 1783, at the same time as Count Nostitz’s National Theatre. It was built in a Neo-Classical design, and the original structure survives to this day, with little alterations

In contrast, the theatre has undergone several name changes. It was name the Royal Theatre of the Estates in 1798 when it was purchased by the Czech Estates, and then became the Royal Provincial German Theatre. Between 1920 and 1948 it was renamed the Theatre of the Estates and was affiliated to the National Theatre. In 1948 the theatre was renamed again, this time Tyl Theatre, after Czech dramatist Josef Kajetán Tyl, who wrote the Czech National Anthem, Kde Domov Můj (Where is My Home). The song was first performed there, in 1834.  In 1990, the theatre was renamed Estates Theatre.

The theatre was built with the aim of staging German plays and Italian operas, although Czech music was also performed there. Numerous artists from abroad have performed at the Estates theatre since it was established, including composers Carl Maria von Weber, Gustav Mahler and violin virtuoso Niccolo Paganini. Most famous of all is the theatre’s strong link with Mozart, who conducted the premiere of his Don Giovanni there in 1787. Four years later, his La Clemenza di Tito was staged at the Estates Theatre.

Today the Estates Theatre is part of the National Theatre and stages plays as well as opera.