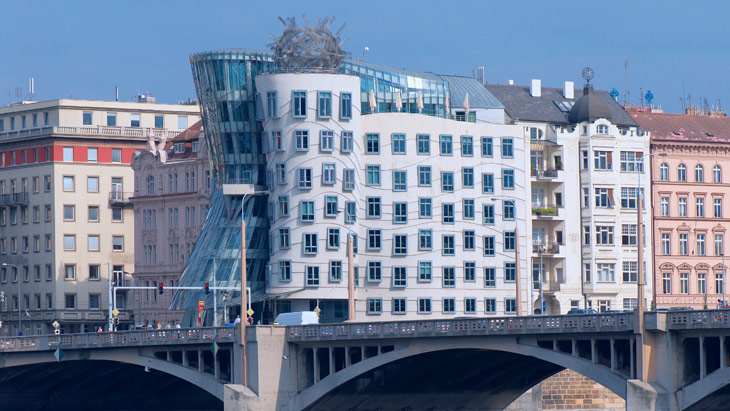 Dancing House (Tančící dům), Prague modern landmark, occupies a position on the corner of Rašínovo Nábřeží and Resslova Street, alongside the Vltava River. This stunning building, constructed between 1992-1996, is a strikingly modern contrast to Prague’s historic architecture. With its daring, curvy outlines, the building is an example of a deconstructivist architecture, with an unusual shape – a couple – man and woman dancing together, holding their hands, with a dress that moves to the music.

Designed by Croatia-born Czech architect Vlado Milunic in cooperation with Canadian architect Frank Gehry, the building is also called as Fred & Ginger, refereeing to Fred Astair and Ginger Rogers – the famous dance duo. Originally, the site was occupied by a Neo-renaissance house from the end of the 19th century, destroyed due to the bombing in 1945. Because of its non-traditional design the building has caused many controversies since it stood out among the Neo-Baroque, New-Gothic and Art Nouveau architecture of Prague.

Today, the house is a must see building on your visit to Prague. It is used as an office building, however, you can visit the popular Celeste restaurant, which is located on the roof and can offer you an experience of a lifetime from the delicious food as well as from the magnificent view of the Vltava River and Prague Castle.