Church of Our Lady of the Snow 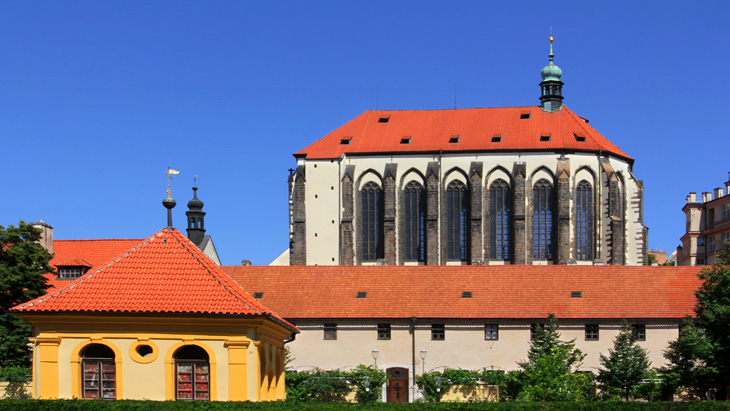 Founded by Charles IV the Church of Our Lady of the Snow is, with 34 meters high vault, the highest church in Prague, and was supposed to be the second largest religious monument in the kingdom, planned to occupy the whole area of the present Jungmann Square. However, it was never completed on that scale; the building work was interrupted by Hussite wars and the church remains unfinished. However, it can still pride itself on the highest arch of all Prague churches and many valuable works of art inside.

Inside the church, there is the highest columned altar in Prague; the picture at the altar depicts a legend, which gave the church its unusual name: it is the legend about founding the Santa Maria Maggiore Basilica in Rome. Allegedly, Virgin Mary had given a sign in the form of heavy snowfall in August, that a church should be built at that place in Rome. Up until 1542, the church belonged to the Carmelite order. At the beginning of the 15th century, it was also the place where Jan Želivský, the leader of the Protestant Hussites, used to preach. He was buried on these premises after being executed in 1422.

Worth seeing are also the works of art in the church, you can see Baroque paintings by distinguished painter V.V.Reiner and also sculptures of saints from the 17th century. Today, there are concerts of choral music held in the church. Being at the spot, one should also see the Franciscan gardens, right next to the church, one of the few secluded and peaceful places in the middle of the city centre.