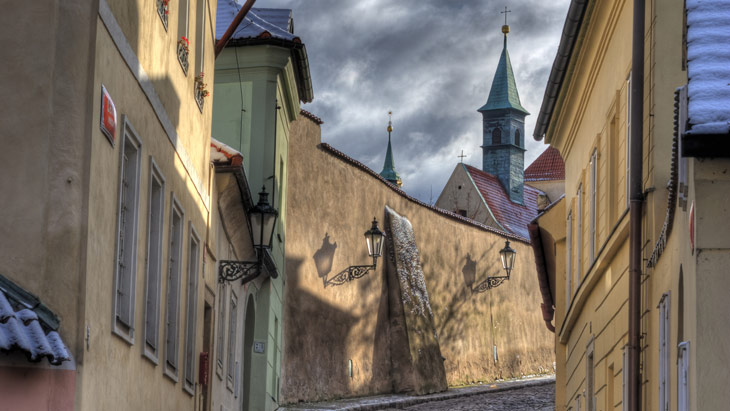 Černínská Street is a tiny narrow street that joins the New World Street with Loretánské Square. This street will take you to the Czernin Palace - Černínský Palace, today, the seat of the Ministry of Foreign Affairs. The street is about 190 meters long and originally, from 18th century up until 1851 it was called the Rear New World.

The name today is derived from the above mentioned Czernin Palace, built between 1669 - 1697 by Hurprecht Czernin of Chudenice, a member of one of the oldest families in Bohemia. According to the legend the name Czernin might have been derived from the Czech word “černý” - black. Black as the black fireplace, behind which a small boy from the noble family was hidden when his whole family was murdered.

The Palace was built according to the plans by Italian architect Francesco Caratti. The Palace housed a famous picture gallery, later, in 1742 it was looted by the French and bombed by the Prussians. It  served as a shelter for the poor, but also was the site of a gala ball organized at the occasion of the coronation of Leopold II.

Černínská Street is a narrow street surrounded by walls which separate it from gardens - on the Western side from the Czernin Palace garden and on the Eastern side from the garden of the Capuchin monastery. On your strolls in Prague, walking up this street certainly should not be missed on your walk to Prague Castle.