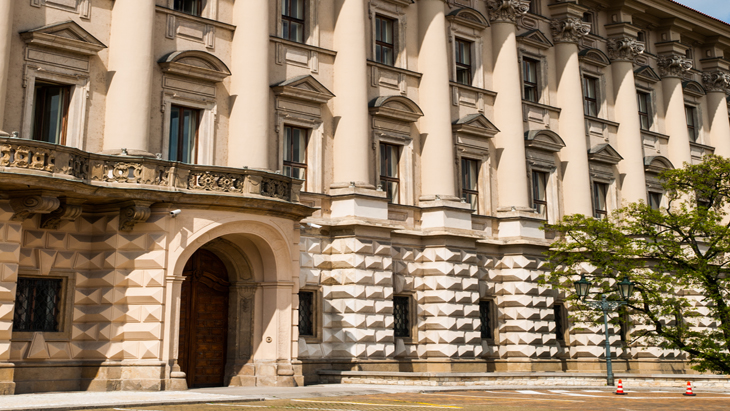 With a main façade 150 metres long, the huge Černín Palace, is the longest Baroque building in Prague, and stands opposite the Loreto complex in Hradčany.

In the seventeenth century, Count Humprecht Jan Černín of Chudenice, an ambassador to Venice, had the idea of constructing a monumental residence in Prague, and after he finally found an architect building work commenced in the 1660s. When the Count died, his palace, which many regarded as ugly, was far from finished, and the project almost bankrupted later generations of his family. In 1851, they sold it off to the Austrian state, which converted it to barracks.

Since the 1920s, the Palace has been the headquarters of the Czechoslovak Foreign Ministry. In 1948, Jan Masaryk, Minister of Foreign Affairs and son of the first Czechoslovak President, Tomáš Garrigue Masaryk, was found dead in the palace courtyard. According to the Communists, who had seized power a couple of weeks before the death, Masaryk had committed suicide. However, many believe that Masaryk, the last non-Communist in President Gottwald’s cabinet, was murdered.

The palace is not open to the public.