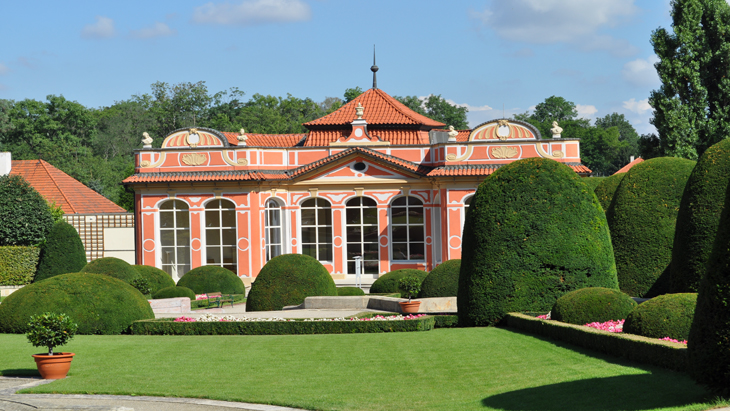 The baroque palace garden was founded in the 2nd half of the 17th century together with the building of the Czernin Palace. Completed in the 1st half of the 18th century it is closed at south by the garden facade of the palace, which boasts a statue of the Hydra battling Hercules by the Czech sculptor Ignác František Platzer. Today, the sandstone statue is located in the Entrance Hall of the Czernin Palace, replaced by a replica in the garden facade. The pavilion, named after Czech architect František Maxmilián Kaňka, dominates the northern side of the garden and was built in 1744.

F.M. Kaňka was involved in building works of the Czernin Palace particularly in the 1st half of the 18th century. However, it is not clear who designed the Kaňka Pavilion, the most probable creator seems to be Anselmo Lurago, prominent Prague architect, who also projected the belfry of the St Nicholas Church in the Lesser Town.

Unfortunately, the Czernin Palace was converted into the barracks in the 2nd half of the 19th century and the garden was destroyed as it was being used as a yard with stables, sheds and smithy. The current appearance of the garden is a result of the reconstruction of the Czernin Palace led by architect Pavel Janák in 1929 - 1934. The above mentioned Kaňka Pavilion is the last evidence of the original baroque garden.