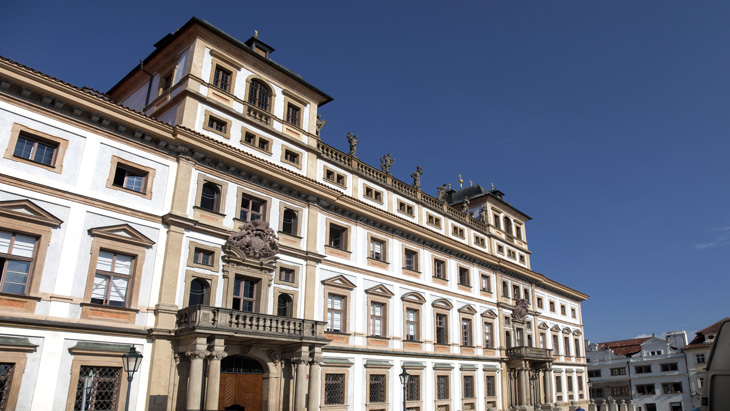 Standing exactly opposite Prague Castle, at the other end of Hradčanské náměstí (Castle Square), is the monumental three-storey Tuscany Palace, one of the grandest of Prague’s many Baroque structures.

Like a number of other palaces in Prague, the Tuscany Palace is the result of demolition. Count Thun-Hohenstein began construction of the palace in 1690, replacing several smaller houses that belonged to the Lobkowitz family. He continued with their plans to construct an imposing noble residence close to Prague Castle, but did not live to see his work come to fruition, and in 1718 Anna Marie Frances, Duchess of Tuscany, bought the unfinished palace from the Thun family. She finally completed the building, which partially takes her name.

The palace was built by Giovanni Antonio Canevalli to the designs of French architect Jean Baptiste Mathey. The building comprises four wings arranged in a rectangle around a central courtyard. The main façade is richly decorated, and features two Tuscan coats of arms, as well as sculptures by Jan Brokoff depicting the Seven Liberal Arts.

In the 1998 the Tuscany Palace underwent extensive repairs.

It is only occasionally open to the public.