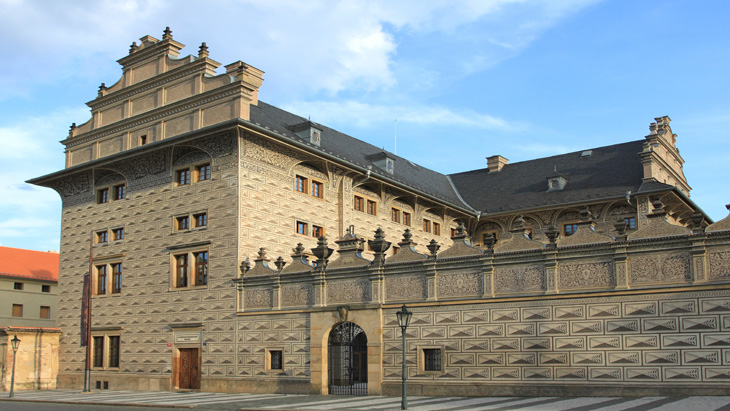 The Schwarzenberg Palace (Schwarzenberský palác), is one of the most striking historic buildings in Prague and occupies a prominent position in Hradčany, on Hradčanské náměstí. The building is also notable for its black and white plaster walls.

It was built between 1445 and 1567 for the aristocratic Lobkowicz family and changed hands several times over the centuries until the Schwarzenbergs, a powerful Bavarian noble family gained it in 1719. By the turn of the twentieth century they had abandoned their property, which later housed the National Technical Museum; after the Communist coup in Czechoslovakia in 1948, the palace became the Museum of Military History.

The Schwarzenberg Palace is a superb example of the use of sgrafitto, where wet plaster is scraped away to create distinctive black and white patterns. Notable features of the interiors include Renaissance paintings from the sixteenth century, which represent mythological scenes.

Members of the public can see the paintings because the Schwarzenberg Palace now houses part of the permanent exhibition of the Czech National Gallery (Renaissance, Mannerist and Baroque painting in the Czech lands).