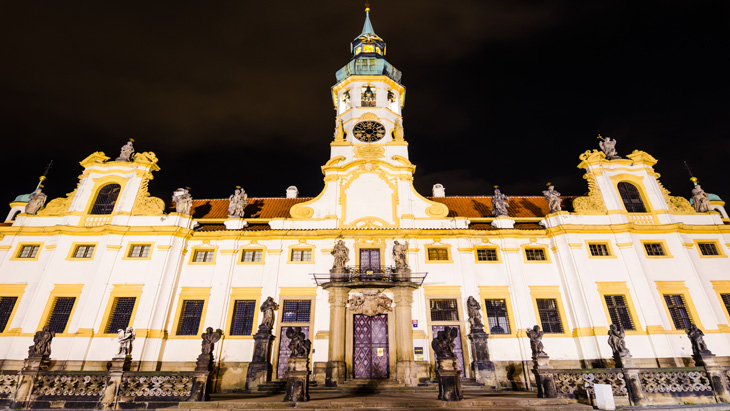 The lavish Loreto complex is an important landmark in Hradčany and one of Prague’s most important historic monuments and tourist attractions. The complex was built between 1626 and 1750 to the designs of Kilian Ignaz Dientzenhofer and is a significant example of the well-known architect’s work.

At the heart of the Baroque pilgrimage site is a structure representing the Santa Casa, the house in Nazareth where the Annunciation of the Virgin Mary took place. According to legend, the house was under threat from the Turks and so angels spirited it off to northern Italy to protect it, with a “stopover” in Dalmatia”. A number of copies of the structure were built in thanks for the miracle, and the Loreto in Prague was established in June 1626, by noblewoman Kateřina Lobkowicz.

The core of the Loreto complex is the Santa Casa, built of brick, and was designed by Italian architect Giovanni Orsi. The exterior  is decorated with sculptures and reliefs, also the work of Italian designers. Inside, the paintings depict the life of the Virgin Mary.

The complex gradually developed over the following centuries, and in 1661 the courtyard of the Loreto was enclosed on all sides and a first floor added. The ground floor is lined with altars, and chapels dedicated to mainly female saints, including St Wilgefortis, the patron saint of unhappily married women and the daughter of the King of Portugal. She was pledged in marriage to the King of Sicily but she had taken a vow of chastity. Legend has it that she was put to death by her father after she miraculously grew a beard, after praying that God would intervene to stop the marriage.

In the middle of the eastern side of the courtyard stands the Rococo Church of the Nativity of Our Lord (Kostel Narození Páně), built in the first half of the eighteenth century by Jan Aichbauer and featuring frescoes by Václav Vavřinec Reiner. The church has one of Prague’s most lavish Baroque interiors, and like the courtyard chapels, there is an emphasis on female saints. On either side of the high altar are glass cabinets containing the fully-clothed and wax-headed skeletons of St Felicissimus and St Marcia.

Equally sumptuous are the priceless exhibits in the Treasury, which contains jewels and treasures accumulated by the nobility after the Battle of White Mountain, which took place a few kilometres away, in 1620. The most valuable item is a monstrance known as the Prague Sun, made of gold-plated silver. It was created in the seventeenth century in Vienna and designed by Johann Fischer von Erlach and contains a staggering total 6,222 diamonds.

The Loreto clock tower, which rises above the ornate main façade, is famous for its carillon of 30 bells, which were cast in Amsterdam in 1694. The carillon rings out the hymn We Greet thee a thousand times every hour and can play a number of other melodies.